RE-DISCOVERING PROVIDENCE AS A PATRON OF THE ARTS 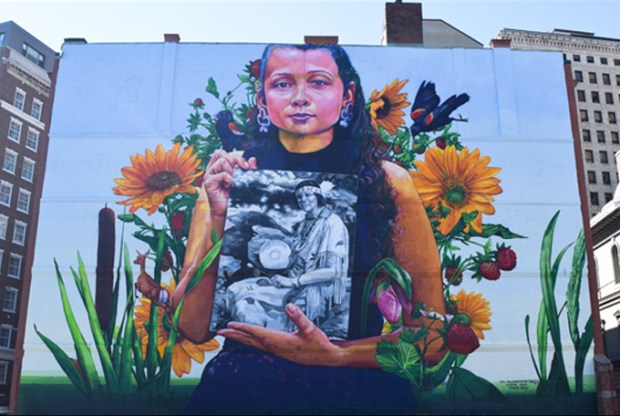 Yarrow Thorne, Founder and Director of The Avenue Concept, says that “public art can give people a reason to congregate and tell stories about Providence.” Those stories can embrace the diversity of both the people who live here and the wide variety of artists who have been inspired to create here.

In any urban location, local history and every aspect of a city can be better understood by discovering the public art on display: murals, sculpture, architecture, decorative details and more. In June 2021, LLC members were invited to “see” Benefit Street with new eyes. This summer, on August 28, walkers will have a chance to “see” downtown Providence with the same new eyes.

In recent seasons, many classes at LLC have offered us a variety of chances to be more mindful of diversity, equity, and inclusion in the world around us. And many of us have enjoyed the opportunities. A walking tour takes us out of a classroom and away from books and the internet. And when walking we take the time to look and to learn on a larger scale.

Art makes a difference; art helps to enhance our understanding of the people and events that have shaped a place. Providence has been, and continues to be, a patron of fine arts and excellent stories.

The Pokanoket Tribe celebrated their second annual Pokanoket Heritage Day at Burr’s Hill Park in Warren, Rhode Island, on a hot and windy August 7, 2022. Drummers and singers at the Heartbeat of the Pokanoket Drum began the festivities shortly after 1:00 p.m. for an estimated crowd of 200 people who visited throughout the four-hour event. 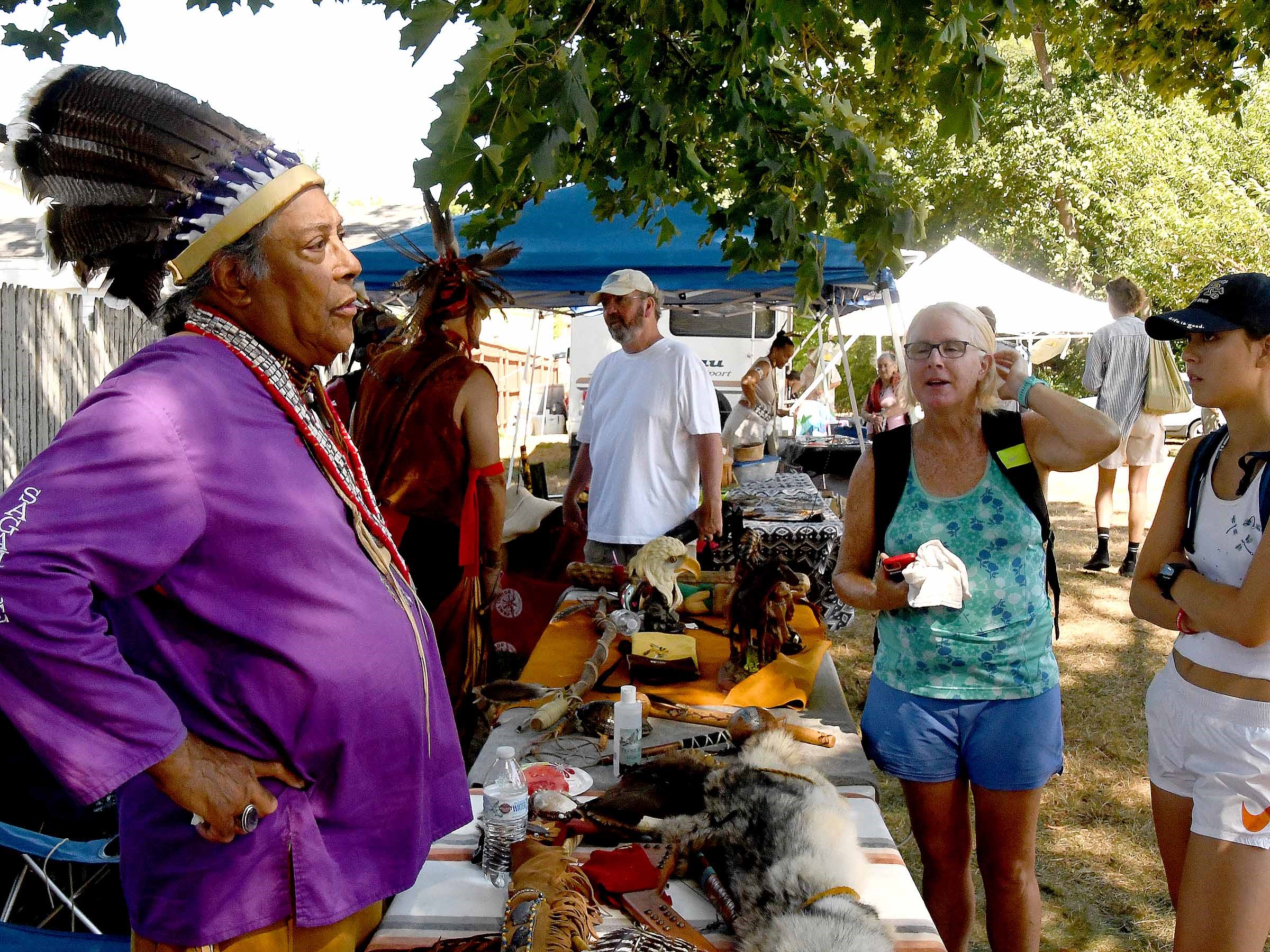 Sagamore William “Winds of Thunder” Guy talks with people at one of the many display tables. 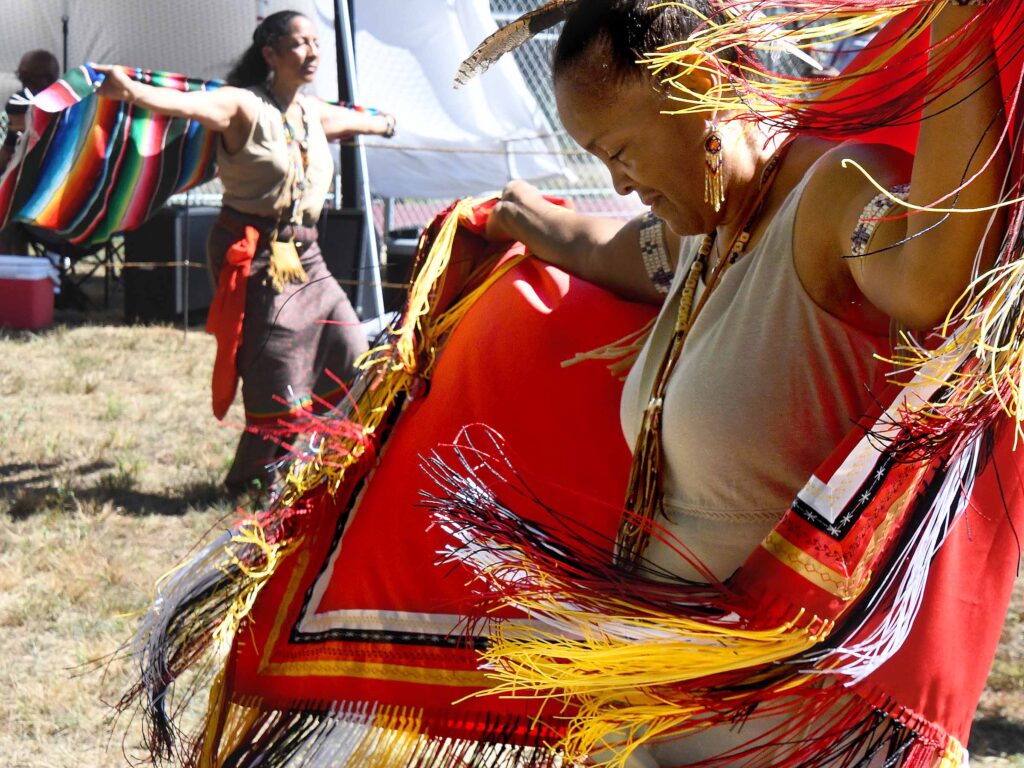 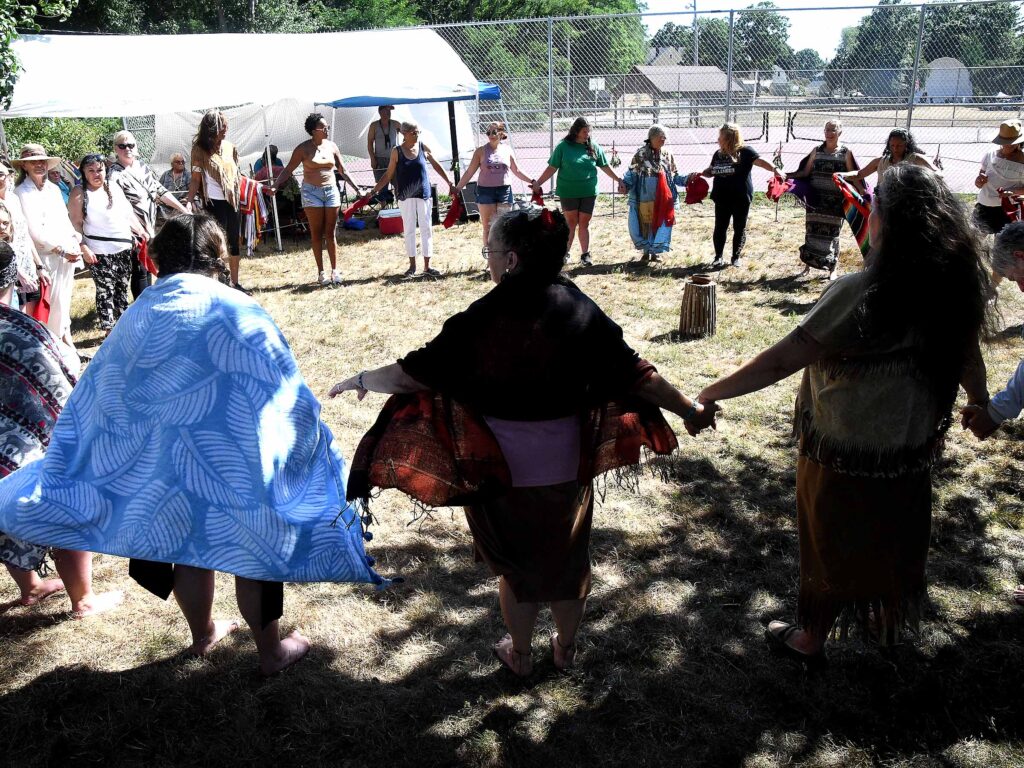 Near the end of the afternoon, Sachem Harry “Hawk” Edmonds and Tribal Elder Lee “Brave Heart” encouraged women to join in a round dance where all women were called to stand in unity in honor of missing and murdered Indigenous women (MMIW). 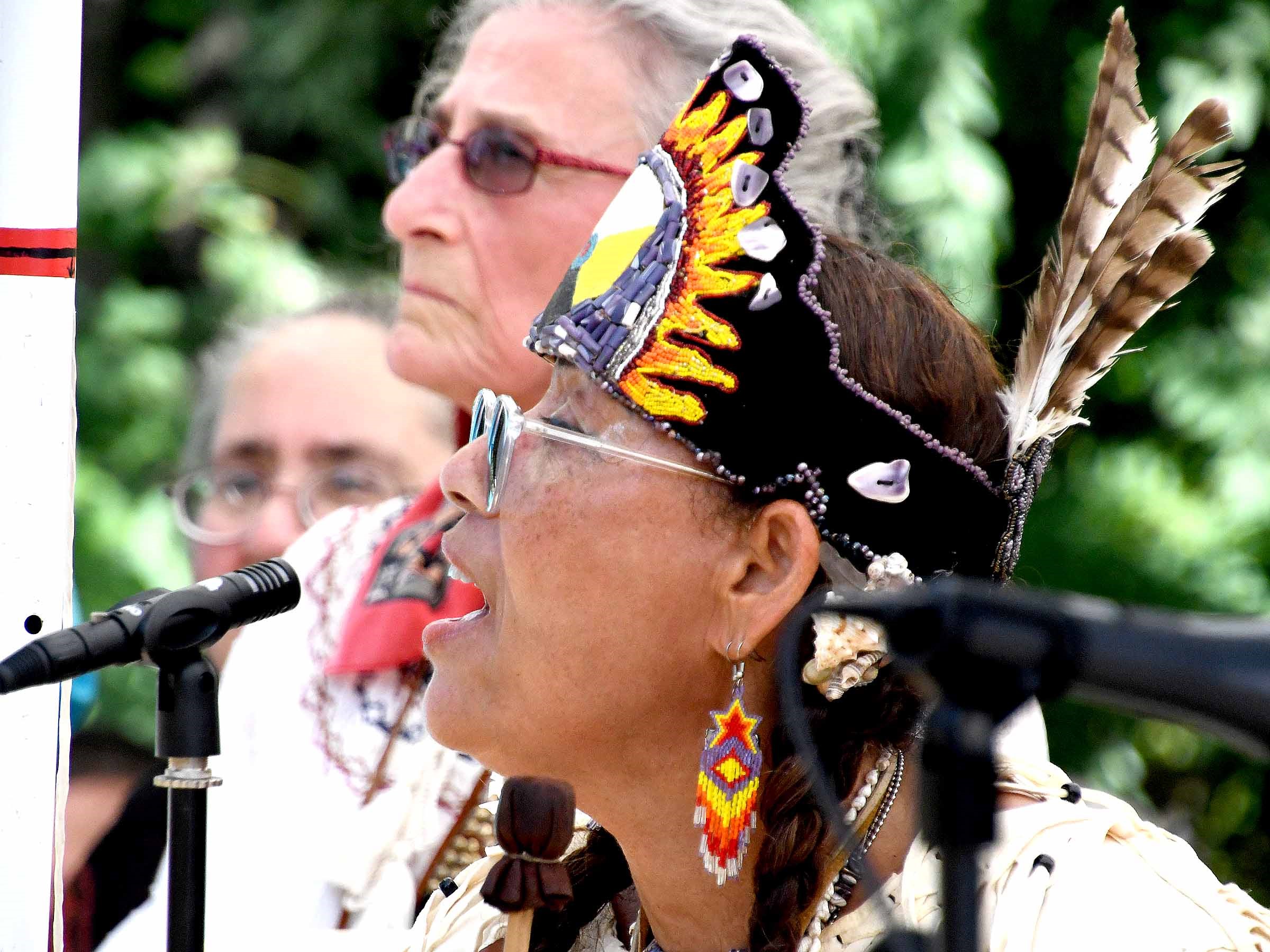 The Heritage Day grew out of a recognition that the Pokanoket Tribe, which was led by the Massasoit Osuamequin who welcomed the Pilgrims in 1621, once occupied the towns of Warren, Bristol and Barrington. The land was then called “Sowams” or “south country”. A treaty between the Pokanoket Tribe and the Pilgrims signed on April 1st, 1621, stood for over 50 years before it was broken during the conflict known as King Philip’s War in 1675. The initiation and duration of the peace is unique among the colonial patterns of interaction across the New World. The eventual conflict was costly to both populations, and the impact of this clash of cultures continues to this day.

Prior to the War, the Massasoit presided over a confederation of tribes extending from just south of present-day Boston to Bristol, RI and from the Atlantic coast to present day Providence, RI. His primary home, called “Sowams”, was along what are now the Barrington, Kickemuit, Providence and Palmer Rivers. Sowams was a rich land, described as “the garden of the patent” by Miles Standish and prized by the Native tribes for its rich soil, abundant wildlife and access to the water that provided their food. When the colonists arrived, much of the land had already been actively managed to provide good hunting and easy access to fishing. 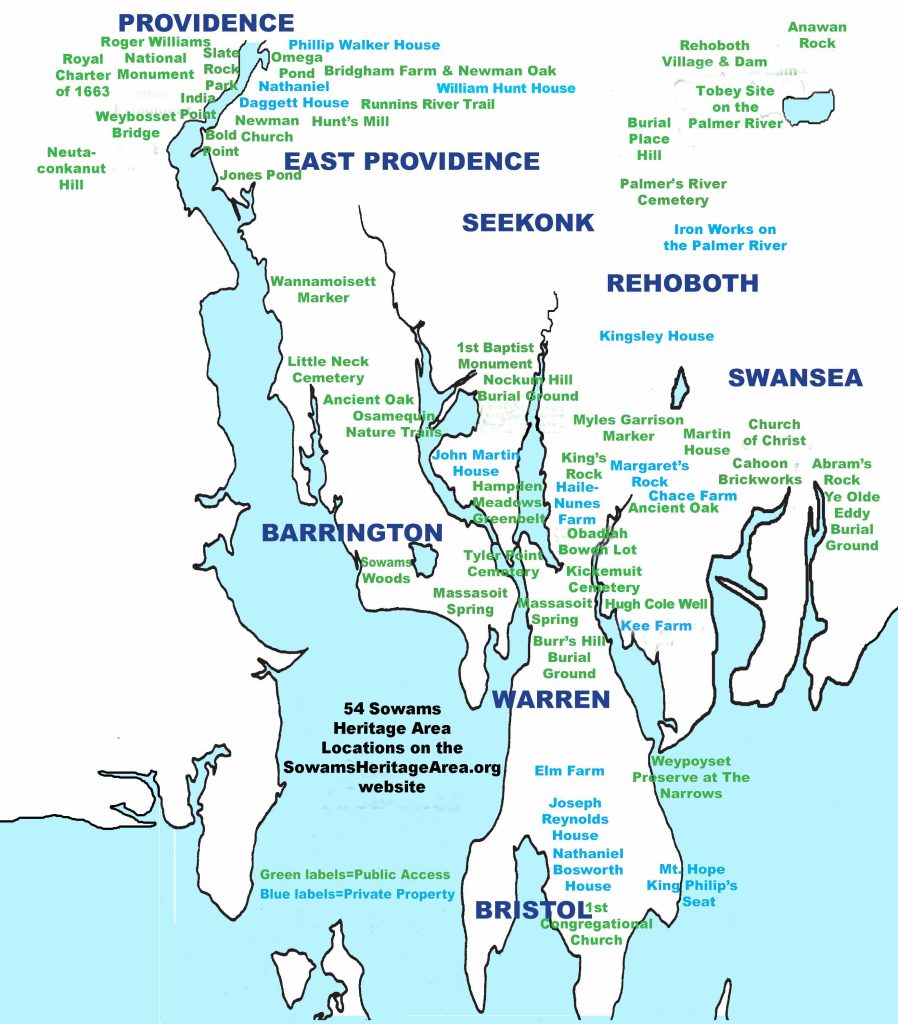 Though he had met briefly many times with European explorers and traders along the Atlantic coast, the Massasoit’s first meeting with the Pilgrims took place in Plymouth on March 22, 1621. That meeting began a continuous peaceful relationship that lasted past his death in 1661. However, over those forty years, some of the land over which the Massasoit presided was permitted to be used for farming by colonists in exchange for money, tools, guns and other items that the English supplied.

As more colonists encroached onto Sowams land, it became clear to both Massasoit and his sons, Wamssutta and Metacom, that they were losing control of their land and culture. Following a series of injustices, war broke out in June 1675, in Swansea (present-day Warren.) Pokaanoket, Narragansett and Nipmuc tribes eventually joined forces to burn colonial villages from Dartmouth to Northampton, including all of Sowams, in an effort to force colonists to flee. In 1676, colonial armies were able to gain the upper hand, and with help from other tribes, were able to bring the war to a close in August 1676.

In the ensuing years, all of the Pokanoket land was taken over by the colonists, and all of the surviving Pokanokets fled the area, were enslaved, or went into hiding. The name “Wampanoag” began to be used after the War as part of an effort to erase the tribe who led the rebellion against the English. Over the next 150 years, towns were laid out in what was once Sowams, and nearly all traces of its original inhabitants disappeared. What followed were years of continual development, the growth of towns, and the gradual loss of much of the original natural abundance that the Native people had enjoyed. 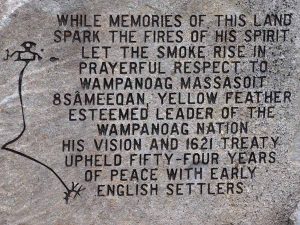 The bountiful nature of the land and water in Sowams still shines through today, though, and the Pokanokets still maintain an active relationship with the land. While much of the original “garden” that the English settlers described when they arrived it is now buried in asphalt, covered with urban structures, or modified to such a degree that it is unrecognizable from what it once was, an appreciation of places like the Ten Mile River in East Providence, the Sowams Woods in Barrington or the Weypoyset Preserve in Bristol, offer revealing glimpses into the past.

While only a dozen houses built prior to 1700 still stand in the eight communities that make up Sowams, dozens of other sites have been located and are now described, documented and mapped on the extensive SowamsHeritageArea.org website. Some locations preserve evidence of the 14-month King Philip War including six cemeteries where participants were buried and a monument at the Myles Garrison where the War began. Artifacts from that period can also be found at the Carpenter Museum in Rehoboth and at the Martin House in Swansea. 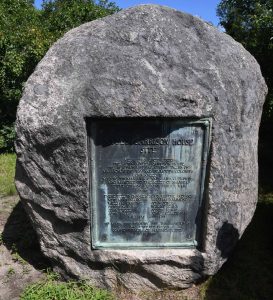 Two colonial era farms and many open spaces and waterways that remain essentially unchanged from that time are described on the website. Churches that first assembled prior to 1700 and located in Bristol, East Providence and Swansea are also included. Parks, including the Roger Williams Memorial, Slate Rock Park and India Point Park in Providence, were built on land in use during the 1600s. Even the Weybosset Bridge in downtown Providence is built on the same site where the first bridge was constructed in the late 1600s. Roger Williams was said to have served for a time as the toll taker for that Bridge.

You are invited to explore the many remaining locations that still give evidence of 17th century Sowams and the important events that began transforming the land into what we have today. Hopefully, your increased awareness of this history will encourage you to protect our remaining natural resources and lead you to a better understanding and appreciation of the Pokanoket people who first welcomed the Europeans to their homeland. 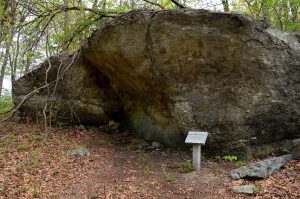 Following his banishment from Salem in January 1636, and suffering from an ailment, Roger Williams headed to Sowams (now Warren) where he sought out the Massasoit Osamequin. There Margaret, a Pokanoket Native, nursed Williams back to health in a lean-to shelter in Massasoit’s winter camp. The following spring, Williams left to settle with his followers near Omega Pond in what is now East Providence.