THE SPOTLIGHT: THE MEMOIR

A Ride for Mrs. Trudeau
By Ruth Mills

It was dusk and snowing lightly as my father nosed his car onto the slushy ramp from King’s Highway 401 to route 138 north. A woman dressed in a fur coat and strappy heels stepped out of a snow bank and into the path of the car. Startled, Dad stopped so he wouldn’t hit her. She took the opportunity to open the rear door and climb in. “I need a ride to Parliament,” she announced.

Mom peered around from the front passenger seat and thought the woman looked like Margaret Trudeau, wife of the current Prime Minister, Pierre Elliott Trudeau. Dad looked in his rear view mirror and came to the same conclusion. She told them she was, in fact, Margaret Trudeau. My parents decided she did not look like a threat so they agreed to take her. They were headed to a religious gathering in Ottawa, about an hour away. They could certainly drop her off at Parliament and still be on time for their engagement.

They had what would be considered a nice conversation as they drove. Based on the things she said, they became more and more convinced that she was the First Lady of Canada. They never quite figured out, however, how to politely ask the most obvious question. What was she doing standing on a snowy ramp in Cornwall, Ontario, wearing inappropriate footwear, hijacking a ride?

She told them where to go when they got to Parliament, directing them to a door the public usually does not see. The guards, when they saw who was being dropped off, swept her into a side door. No questions asked! 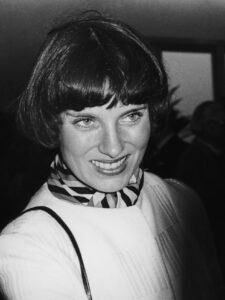 Mom and Dad had an incredible story to tell when they reached their destination. One person there was able to provide an explanation. So far the Prime Minister had managed to keep his wife’s mental illness out of the headlines but the stories were starting to leak. Mrs. Trudeau had been sneaking out, hitchhiking around the country, and then reappearing at random times. My parents were one small chapter in that saga.

A few years later Margaret Trudeau was diagnosed with bi-polar disorder. She got treatment and was able to return to a more conventional life. Her marriage did not survive. Today she is the mother of the current Prime Mini

ster, Justin Trudeau. To my knowledge, she serves honorably in that role.

Last week someone in my memoir writing class wrote about an experience she had concerning a haircut she had had when young. That got me thinking about hair and my experiences and thoughts about hair.

I think all girls and women have stories about hair and haircuts and styles, more so than men. Maybe because we have so many more choices.

My first memory about hair style was when I was about 6 and decided to cut my hair. I took the scissors and cut the hair above my ears on both sides and straight back. That was the first time my mother took me to a professional to get it “fixed”. hair and my brother.

Mostly, when I was in grammar school my mother braided my hair. She was very good at braiding and did my hair in French braids. I hated them. And all the adults complemented my mother’s ability to do such a good job braiding. As I got older and could do my own hair, that was the end of the braids.

My mother gave me home permanents but they were always a disaster. My hair came out in frizzes instead of nice curls. Later, when I had it done in hair salons, their permanents also came out frizzy on me. I finally gave up on ever having permanents—but I think the last time I had one was when I was in my 20’s. There was always the hope that one would come out perfect instead of too tight.

In the 1950’s, when I was in high school, there were many different hair styles popular. The poodle cut (short and curly) was one. It was also the beginning of the bouffant, the pixie, and longer hair with curls cascading down. Long hair was usually shoulder length. Because of so many choices I remember teaching myself how to do pin curls, then how to put my hair up in rollers. Sleeping on pin curls is easy—the agony of rollers was very real. What we girls did for beauty.

But looking back I am glad I learned to do these things; I don’t think many women today can do their own hair in pin curls or rollers. I don’t do it often but occasionally I need to put in a roller or pin curl or two and I can do it.

When I was in college, my freshman year, Donna asked me to cut her hair. That was something I had never done, but she said she had naturally curly hair (actually naturally wavy) and I couldn’t ruin it, so I started cutting her hair. What she wanted was essentially all her hair cut to the same length and the curls would take care of the rest. I cut her hair for 1½ years, while we were at Oxy (Occidental College) together, before she transferred to Barnard and I went to UCLA.

In the spring of my sophomore year, one of the freshmen girls in my dorm asked me to cut her hair. She wanted essentially what Donna had but she had long hair at the time. I tried to dissuade her but she kept asking me to do it. Finally I said OK. That night about 10 women crowded into my dorm room to watch. Oxy was really the last of my short-lived hair cutting career, except for cutting my children’s hair years later.

One of the dangers of being a parent is the unintentional consequences from our well-meaning efforts of trying to be a good parent. Both my daughter and son have very curly, fine hair. To keep them looking neat, I gave them both short hair cuts. My daughter hated her short hair and once in high school has refused to ever have her hair cut again. Her hair grows to about mid-back before it breaks, which limits the length. I am waiting for the day when she will be willing to have it styled.

My son let his hair grow during his senior year but once in college got it cut into the conservative style he has had ever since. Actually, my stepson also had long, curly hair when he was a senior in high school. Maybe that was a boy’s rite of passage during those days (there is a 20-year spread in their ages).

I also have a lot of issues about other people’s hair. One problem with long hair (both on the back of the head and on the front) is that people don’t seem to be able to keep their hands off and/or out of it. I am hard of hearing and have needed to partially lip read to understand people for years. Men with mustaches or beards will often pet their facial hair making lip reading even more difficult than just the difficulty the facial hair gives to lip reading.

And women with long hair spend inordinate amounts of time playing with their hair—running their fingers through the hair, putting it up and then taking it down, putting strands in their mouths, taking it out of their mouths, and continuing, like a song with different verses and repeating choruses. One time I had to move my seat in church because the woman in front of me wouldn’t stop playing with her hair. It bothered me so much and I couldn’t stop watching because she was between me and the front of the church. Then I thought about what my brother told me. It isn’t whatever is bothering me that is the problem, it’s the fact that I let it bother me. So then, I am mad at the woman with her hands in her hair and my brother.

Waves pelted the hospital windows
your sailboat rocked on its mooring
“I am in Narragansett Bay,” your voice did not carry
your hands held the splintered tiller
a whisper of salt settled in your transparent fingers
It was your last night, but we didn’t know it

From the hospital bed
The morphine drip did not stop you
you dragged your feet to the cold white tile floor
You asked me to dance, I held you in a warm embrace

The tumor the size of a small buoy
Had anchored in your body
And then it grew, rippled throughout
You could not dance away your suffering

The last time on the bay
You kayaked, unable to pull the white Dacron sails,
spinnaker, tic tac maneuvers were obsolete

From March 28 to April 8, 2022, Hamilton House is featuring a show with the paintings of LLC member Evelyn Blum. The paintings are mostly landscapes with some still life; all is new work.